Strategically located in the centre of the Mediterranean Sea, Malta is at the crossroads of Europe and Africa and has benefited from this unique position for thousands of years. Once a crucial trade route and maritime settlement for many of the world’s largest empires; from the Phoenicians, Romans, Byzantines, Arabs, The Knights of St John and most recently the British, today Malta is famous for its hospitable locals, beautiful landscape and bustling event calendar. Located just 90km south of Sicily, Malta boasts one of the finest climates in the world, with over 300 days of sunshine per year, warm summers and mild pleasant winter months. Malta also has two official languages – Maltese and English.
Malta is within easy reach by land, sea and air, and its award-winning International Airport brings in tourists from all over the world. Once you arrive in Malta, you will be amazed at the diversity that this island has to offer. At only 27 kilometres in length from north to south, Malta has a wealth of history stretching back more than 7,000 years.
From the north of the island one can enjoy spectacular stretches of sandy beaches at Mellieha, or hop across to discover Malta’s sister island of Gozo for a treasure trove of wonders. Travel to the centre of Malta and one can visit Mdina, Malta’s old capital; a beautiful fortified city filled with winding streets, beautiful museums, palaces and spectacular panoramic views from its walls.
In the harbour areas, one can enjoy a more modern lifestyle, becoming part of Malta’s cosmopolitan commercial and residential areas of Sliema, St. Julian’s and Paceville; the best places to experience Malta’s unique lifestyle, nightlife and to indulge in up-market retail therapy.
Valletta is Malta’s prestigious Baroque capital city and a UNESCO World Heritage Site. Valletta is a thriving city offering a glittering array of Baroque palaces, grand cathedrals and churches, museums and even Fort St. Elmo at the tip of Valletta’s peninsula. Filled with the charm of an old city, Valletta is filled with local crafts, markets, intimate wine bars and restaurants and plenty of hidden gems. Valletta has been chosen as the European Capital of Culture 2018.
A destination rich in culture, friendly atmosphere, historical wealth and a paradise for those who enjoy the great outdoors. From spectacular fireworks displays at the local village ‘festas’ during the summer to local crafts and gastronomy experiences to beautiful countryside walks at Dingli Cliffs, Malta promises so much more than just an ‘island lifestyle’ and is the perfect destination for everyone.

Malta is an island located in the Mediterranean Sea, 93km south of Sicily and 230km from the nearest point of the North African mainland. It is an idyllic holiday destination for families, couples and single travellers with a wealth of history and cultural activities for all. Alternatively, the are multiple beaches, bars, restaurants and world class shopping available for a relaxing time in the sun.

The capital city is Valletta

There are approximately 417,608 inhabitants living on the island

The currency is Euro

Malta is part of the European Union

There are two official languages, Maltese and English

Malta’s first inhabitants came from Sicily, and they were mainly fishermen, farmers and hunters. The first villages formed in 5,000 BC and the villagers mostly lived in caves.In 4,000 BC the most distinguished period in the Maltese history began, when it is believed that the first temples were built. To this day, temples built during that time can be found around the island, such as the Ggantija temples. These are believed to be older than the Stonehenge temples, and they form part of the UNESCO world heritage.

In 1,000 BC Malta was invaded by the Phoenicians, who used the islands for the market trading due to its strategic position in the Mediterranean sea.

Following the Phoenicians, other cultures have come to Malta and influenced the island, such as the Carthaginians, the Romans and the Byzantines.

The Arabs ruled Malta for 220 years in 870 AD and they had a major influence on the Maltese language, making it the only Semitic based language written in Latin.

The medieval years began when the Normans conquered the island in 1090, after expelling the Arabs. After the Normans other invasions followed until the Knights of St. John conquered Malta in 1530 and lasted for 268 years. The main influence of the knights was the change of the capital city from Mdina to Birgu and then to Valletta. Both Birgu and Valletta were built thanks to their strategic position, as they are close to the sea and therefore were used as harbours. When the Turks tried to invade Malta in 1565, the Knights of St. John defended the island and built fortifications around Valletta, Birgu and Senglea. On the 8th September the war ended as the Turks retreated, and to this day the date is celebrated and remembered as the victory of The Great Siege.

In 1798 Napoleon Bonaparte invaded Malta and his rule lasted only two years, as the Maltese rebelled with the help of the British, who then conquered the island in 1800. Malta became the headquarters of the British navy because of its excellent position and harbours.

During World War II, in 1942, Malta received the English George Cross for their bravery and it has been part of the Maltese flag ever since. In 1964 Malta requested independence through a referendum, and on the 21st September of that year they gained it, with Queen Elizabeth II still head of state. Ten years later, on the 13th December 1974, Malta became a republic. In 2004 the island joined the European Union, and is today the smallest member state.

THINGS TO SEE AND DO IN MALTA

Malta has many attractions to offer that suit everyone’s needs and expectations. Here’s a list of the main things people can see and do in Malta. 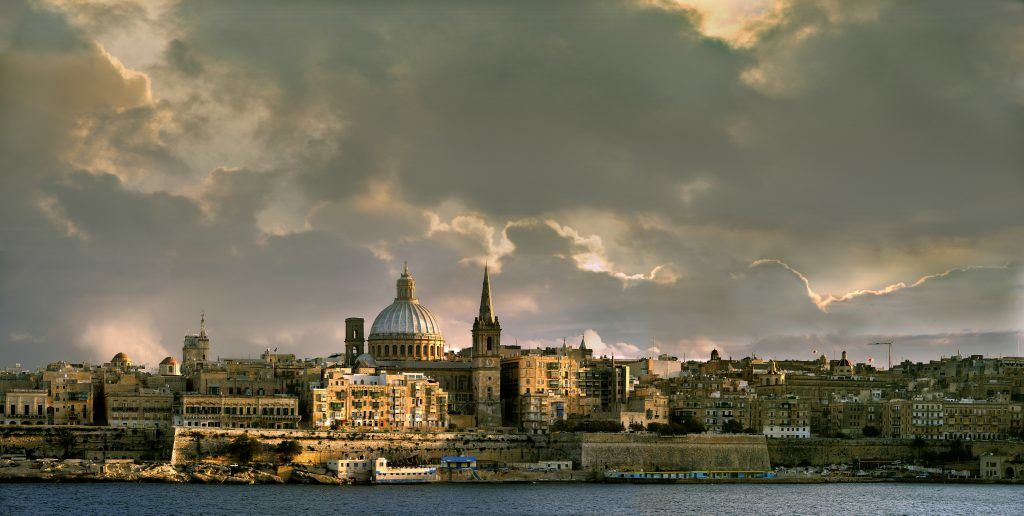 Malta’s capital city, Valletta, is a must see for those who are visiting the island. Surrounded with picturesque architecture, history and filled with shops, restaurants and bars, this city is very welcoming. Because of its rich history it has become a UNESCO World Heritage site. 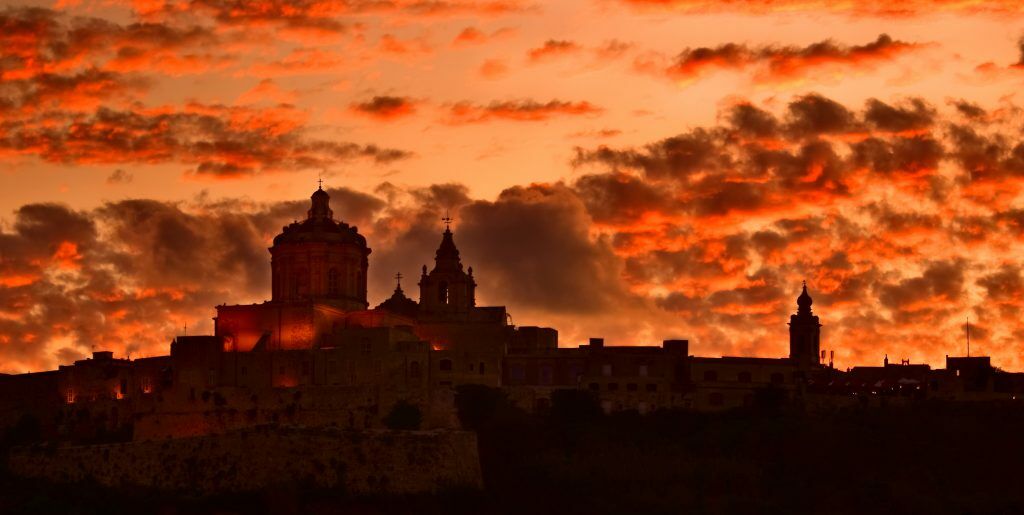 Mdina, Malta’s former capital city, is a fortified city found in Rabat. Due to the fact that not many cars are allowed inside the city and its small population, Mdina is also known as the Silent City. Known for its beautiful view of Malta and history, Mdina is a major touristic attraction and a must see for those visiting the island. 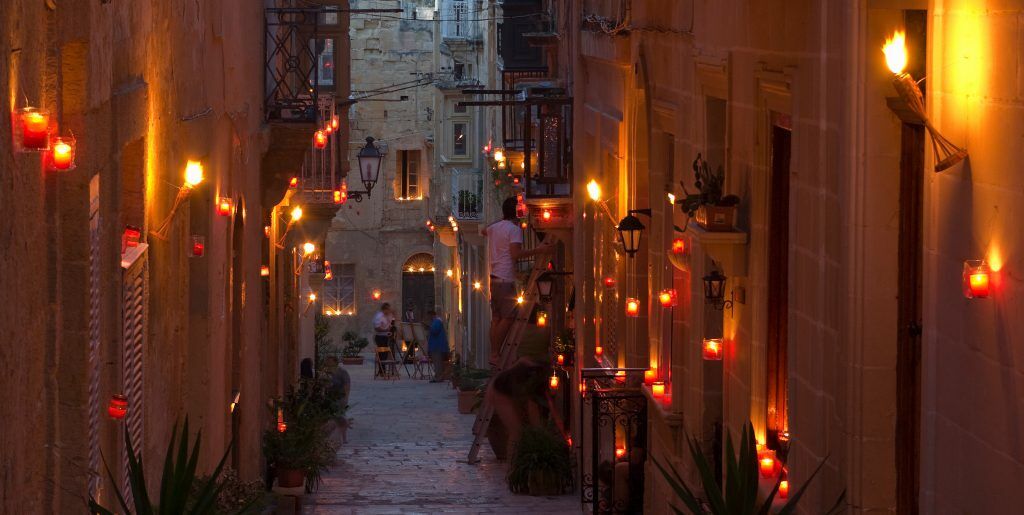 Birgu, Senglea and Cospicua are three fortified cities found in the south of Malta, and together they form the island’s famous Three Cities. These cities are rich of history, dating back to the Phoenicians, and can give a true glimpse at the authentic Maltese life. 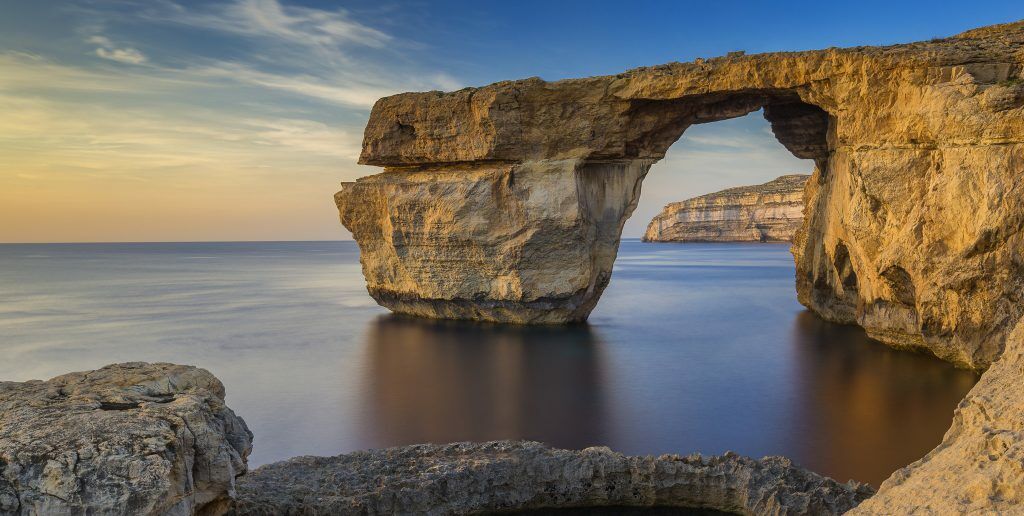 Gozo is one of Malta’s sister islands and is located only 25 minutes away by ferry. Although very close to Malta, Gozo is known to be more rural and peaceful. Gozo is three times smaller than Malta, but nonetheless there are many sites to see, such as the famous Azure Window. 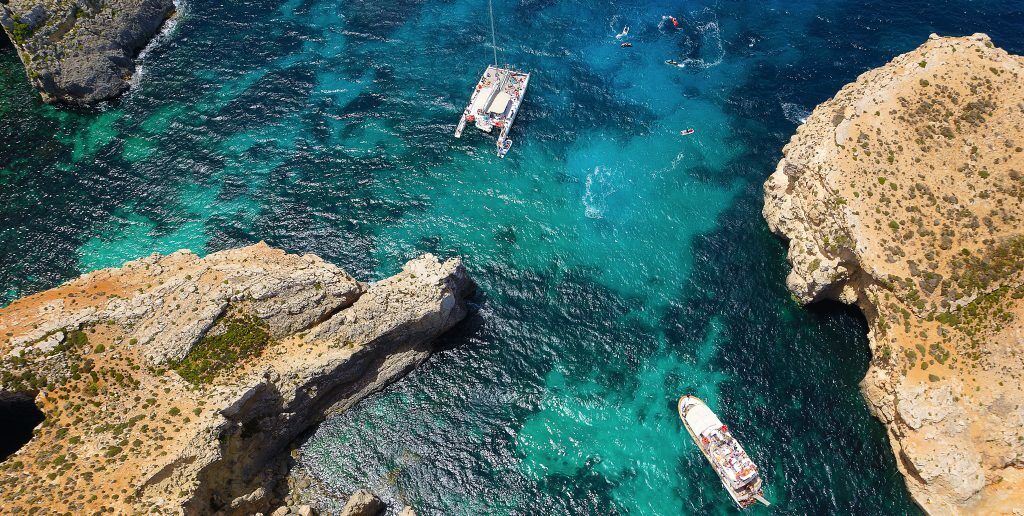 Comino is the smaller of sister islands in Malta and is famous for its crystal clear water in the Blue Lagoon. Many come on the island to dive, snorkel or simply relax by the sea. What is interesting to know about Comino is that no one lives on the island, and just one hotel can be found there. 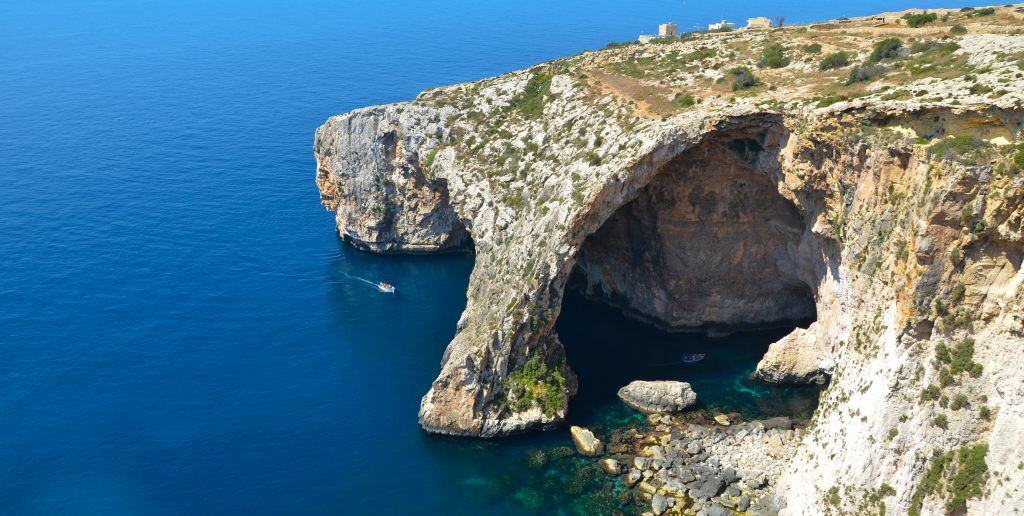 A popular attraction in Malta is the Blue Grotto, situated in the southern coast of the island. This site is very popular because of its location it is recommended to visit it in the early hours of the day when the sun is still low to enjoy a better view. 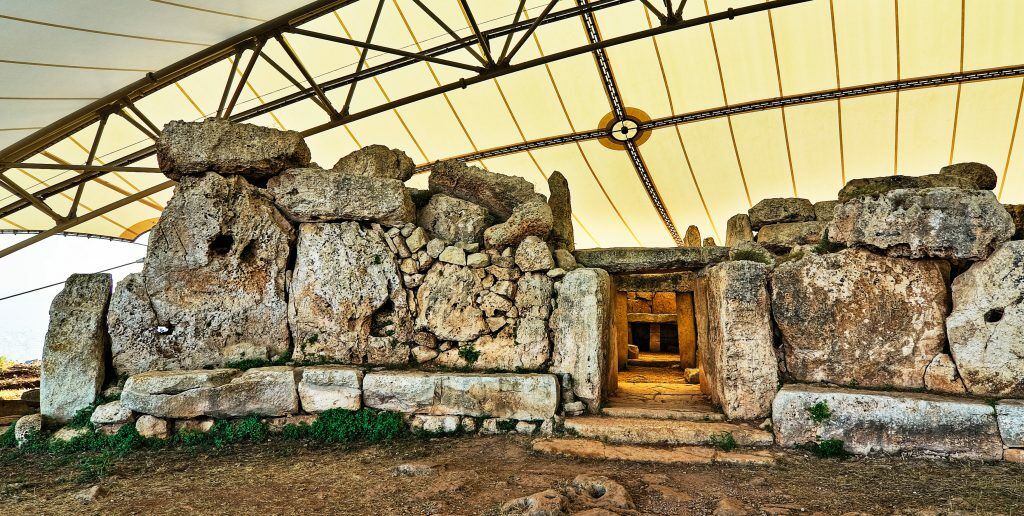 It is believed that the oldest freestanding temple is a UNESCO World Heritage Site named Ggantija, a temple that dates back to 5,000 BC and is found in Gozo. Along with this temple, there are another 5 megalithic temples around Malta that are listed under the UNESCO World Heritage Sites; these are ĦaġarQim and Mnajdra both found in the village of Qrendi,  Ta' Ħaġrat Temples and Skorba Temples in Mgarr, and the Tarxien Temples in Tarxien. 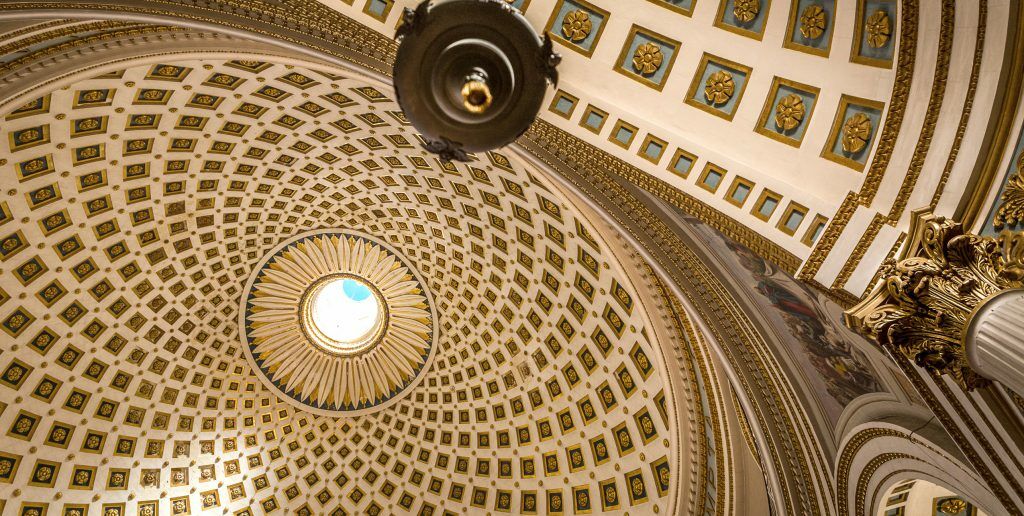 The third largest church dome in Europe is Malta’s famous Church of Assumption of Our Lady, also known as the Mosta Dome. The church is known for what is believed was a miracle, when back in World War II a bomb went through the roof of the church, with hundreds of people inside, but did not explode. 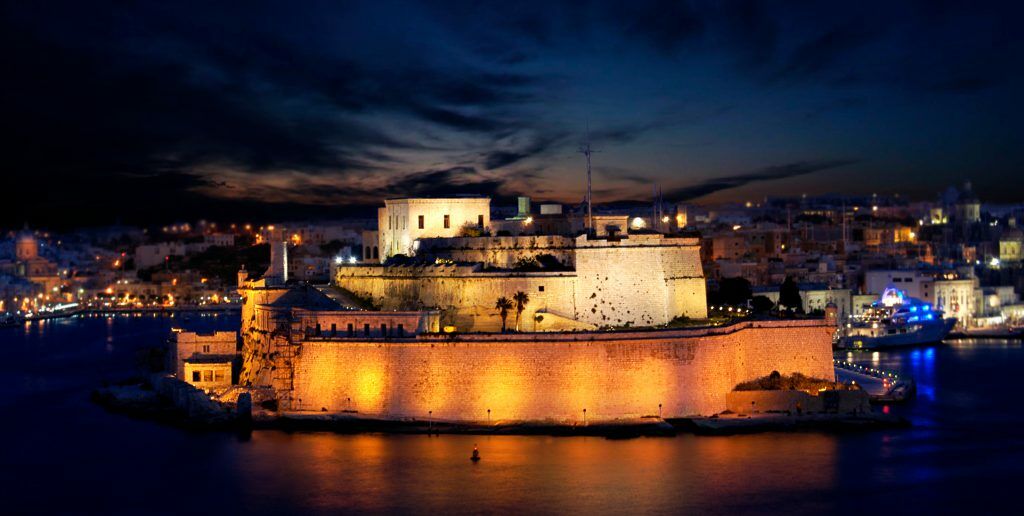 Located in the centre of the Grand Harbour of Birgu, Fort St Angelo is a large bastioned fort that dates back to the medieval period when it was originally built as a castle. Between 1530 and 1690 the Order of Saint John rebuilt it as a bastioned fort. The fort was used during attacks and wars, and although it was damaged during World War II, it was later restored. 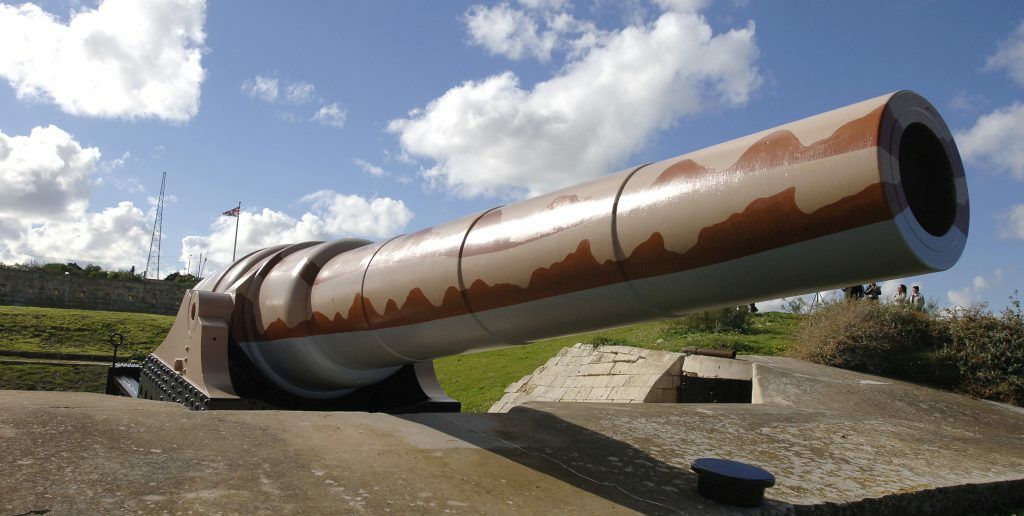 The world’s largest cannon, a 100-ton gun, is found inside the Fort Rinella in Malta. During World War II, the fort was used by the British to surveille the coast. Today the fort has been turned into a museum open to the public. 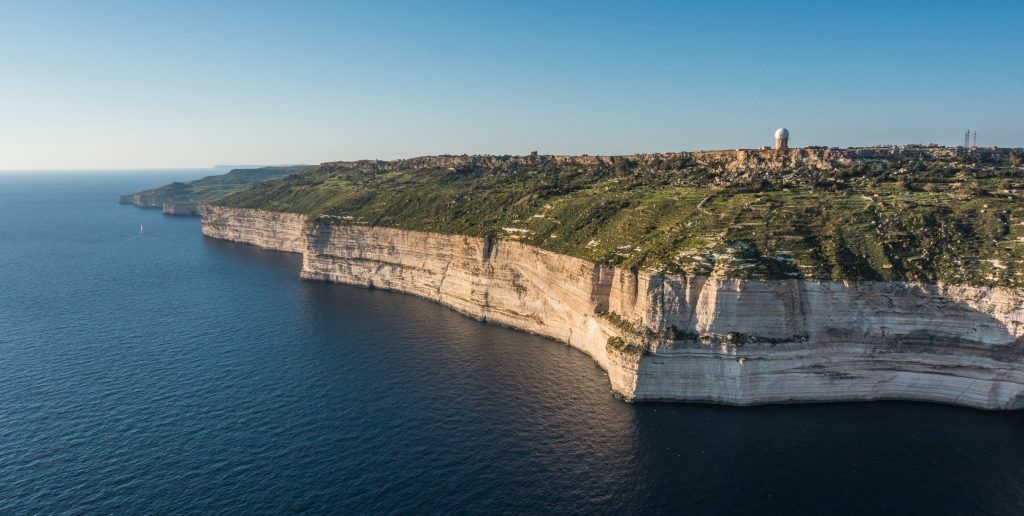 The highest point of Malta is found in Dingli Cliffs, approximately 220m above sea level, dropping right down to the sea. The beauty of this location is the outstanding views one can enjoy, with breathtaking sunsets and relaxing walks along the cliffs. 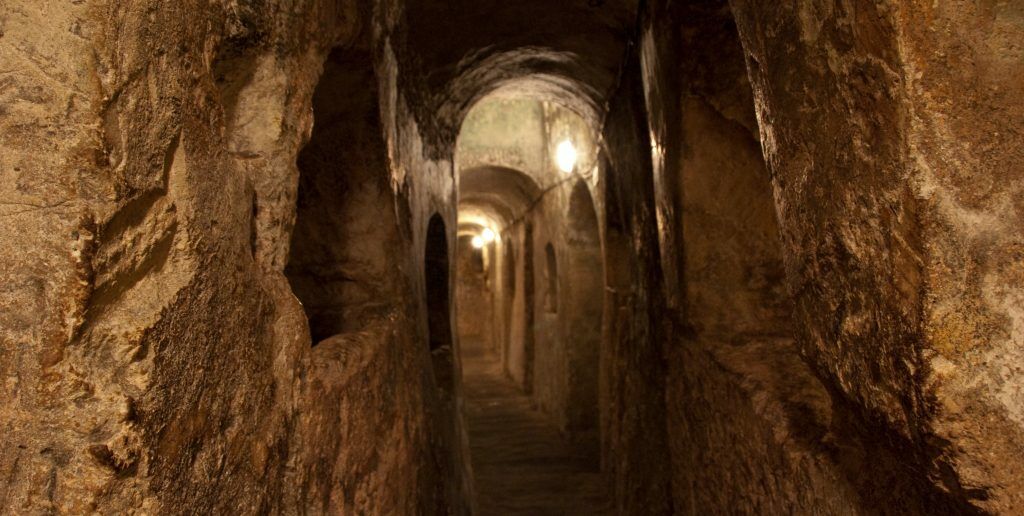 Located close to Mdina and Rabat, the St Paul’s Catacombs are evidence of the early signs of Christianity in Malta. 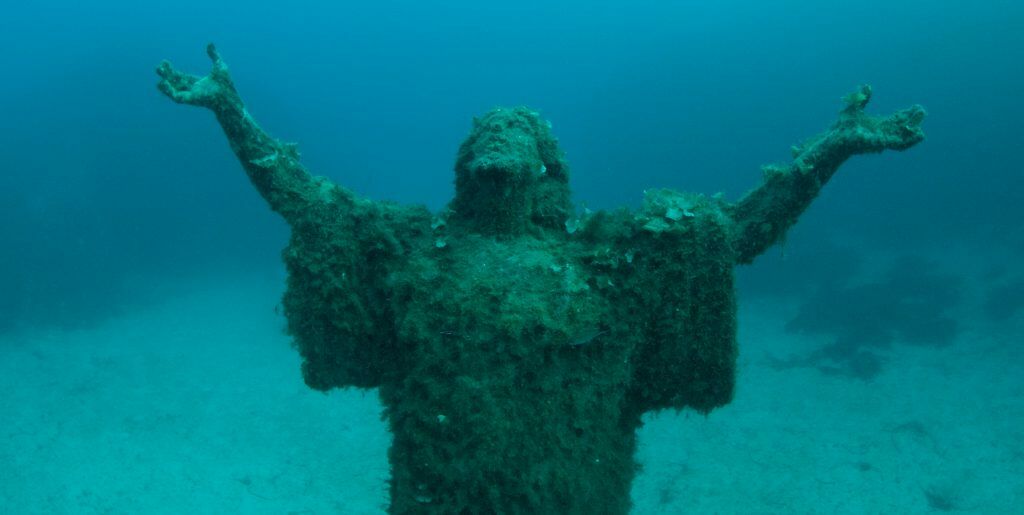 Malta is one of the most popular diving destinations in Europe, with plenty of wonderful sites and perfect weather conditions and water clarity. With over 40 diving schools on the island, you can either enjoy an introductory dive or start a beginner course.

THINGS TO DO
WITH KIDS IN MALTA 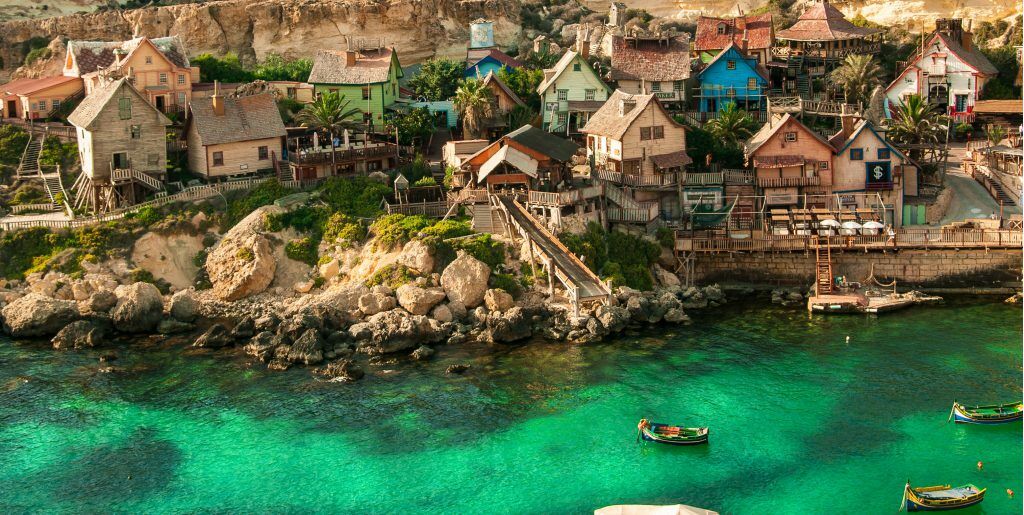 The film Popeye was filmed in Malta in the 1960’s and the set for the movie, now known as ‘Popeye Village’, has become a major attraction. Everything from this place will remind you of the famous film, from the houses to the characters ready to entertain you. 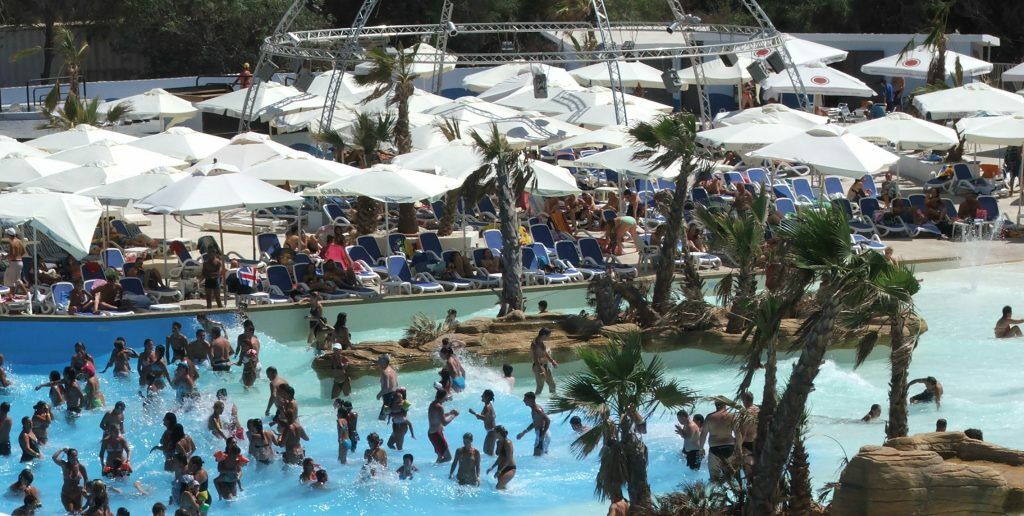 Keep your kids entertained with water slides, the wave pool and fun activities at Splash and Fun Waterpark. Perfect for families with children of all ages and adventurous parents

At the Mediterraneo Marine Park in Malta you can educate and entertain your children at the same time. The park offers the opportunity to better understand dolphins, sea lions and parrots by watching shows and interacting with them. There is also the opportunity to swimming with the dolphins.