The first historical indications of a carnival taking place in Malta, dates back to a jousting tournament in the early 16th Century during the times of the Knights of St John.  Carnival precedes the forty days of lent – a time of penance and frugal meals where meat was not allowed.  The name itself indicates that meat(Carne in Italian) was allowed (Vale) during the 5 days of merriment that led to the sombre Ash Wednesday.   Talking about food, the Maltese confectioners will proudly display their “Prinjolata” a pine nut and fruit mould covered in a thin white iced coating which in turn is drizzled with chocolate and coloured cherries.  It is sweet, delicious and traditionally prepared only at this time of the year.  In the years gone by the dancers on the floats would throw coloured “Perlini” which are sugared almonds to the crowds, but not anymore as the price of these almonds is nowadays and expensive affair!

The main carnival event in Malta takes place in Valletta and Floriana but other villages also organise smaller carnival events.  The one that is particularly known and visited is that of Nadur, a small village in Gozo which has probably the most boisterous and macabre one on our islands. This is a time when people dress up in the most original costumes that they can think of, be it futuristic, fantasy, satirical or historical glamour, this is a time to parade and be seen. The decorated floats full of physcadelic colour and with elaborate mechanical movements are painstakingly and secretly created months ahead of the great event by dedicated and passionate enthusiasts.  Elaborate costumes are hand sewn with millions of sequins, coloured cloth, diamantes and coloured crystals and stones, some of which illuminate in the dark.  They are animated with choreographed dances and teams compete with each other to win coveted prizes. 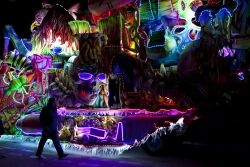 One may see the floats enter triumphantly into Valletta on Friday the 28th February, with dancing competitions taking place in the enclosures for which one can pay a small fee to watch and admire.  Parents often take this opportunity and especially on the 1st March – Children’s carnival, to take their masked, painted and dressed up kids to watch all the bright colours and join the fun, under the watchful eye of his majesty the “King of Carnival” – a magnificent float that takes prominence in all the celebrations.  Lively music plays another important role and the dressed up bandsmen participate and compete too.   The culmination of the event takes place on the Tuesday the 4th March with a big defile going through the main street of Valletta and into St Anne’s Street in Floriana ending with a huge street party and a colourful and impressive fireworks display that lights up the skies.

If fun, colour and merriment are what you seek, then this will be a perfect time to come to our Islands and enjoy the mega party!

View all posts by: admin